The Complete Guide to Cannabinoids

by admin
in Healthy Living
0

The most famous cannabinoids are tetrahydrocannabinol (THC) and cannabidiol (CBD). THC is most widely known for its mind-altering, high-inducing properties, and CBD oil is rapidly gaining in popularity for its potential in relieving a host health complaints. But there are more cannabinoids than just THC and CBD.

In fact, it is believed that there are at least a few hundred different cannabinoids found in the cannabis plant and each one behaves a little differently in the human body. If you have been considering a full-spectrum CBD oil product in order to reap the benefits of the whole hemp plant via the entourage effect, then you need to understand these lesser-known cannabinoids. Or, if you’re on the lookout for the next big thing in the world of natural wellness and cannabis research, this should be your starting point.

Here is your complete guide to cannabinoids.

CBG’s parent, CBGA, sits atop the cannabinoid family tree as it is the chemical precursor to THCA, CBDA, and CBCA, from which other major cannabinoids are offshoots. A non-psychoactive, CBG is believed to play a large part in the antibacterial nature of cannabis.

CBG interacts with the endocannabinoid system in a manner typical of phytocannabinoids, targeting receptors to reduce inflammation and pain. CBG has also shown potential to inhibit the growth of certain cancer cells, and to protect brain cells.

CBDA is found in the largest quantities in raw cannabis and hemp plants that with a high CBD content. CBDA is the raw, acid precursor to CBD. When heated, say by a flame or during the drying process, CBDA breaks down and becomes CBD through a process known as decarboxylation.

CBDA may not interact with the endocannabinoid system but instead affect other enzymes and receptors. One such interaction is between CBDa and the cyclooxygenase enzymes. These enzymes are responsible for the production of prostaglandins and reducing the experience of pain and inflammation.

CBDA may also be useful in treating mood disorders, like anxiety and post-traumatic stress disorder (PTSD). This unique cannabinoid has also shown promise as an effective anti-nausea agent, and in one study was even better than CBD at reducing nausea in the animal test subjects.

Cannabidiol has been the subject of much research of late. Found most abundantly in hemp, CBD can potentially support optimal health and homeostasis and it does so without any of the intoxicating effects of THC.

Affecting the CB1 and CB2 receptors indirectly, CBD has been shown to mediate the body’s response to pain and inflammation, protect the body from free radicals, and provide neuroprotective effects. Already used for the relief of chronic epilepsy, CBD has incredibly promising potential for its use in the treatment of a range of inflammatory, neurodegenerative, and mood-related conditions.

CBN is an interesting cannabinoid in that it is created through the degradation of THC and is generally not found in raw cannabis. The process in which CBN is produced occurs in the following order:

Effectively, CBN is created when cannabis is left for a prolonged period of time and is exposed to air, light, and heat. This degradation turns the psychoactive THC into CBN, which is a weaker psychoactive but also provides an additional sedative effect sometimes referred to as “couch lock,” a potential benefit for insomniacs.

CBN is an agonist of the CB2 receptors, meaning it enables their effects, and it also interacts with TRPV2 receptors which play a role in inflammation, metabolism, and cardiovascular functioning. 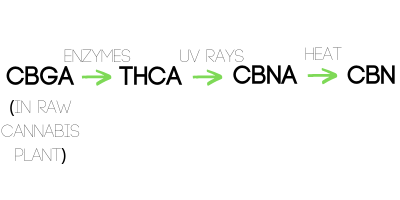 Created from CBCA after exposure to heat or ultraviolet light, CBC is another of the non-psychoactive cannabinoids undergoing extensive research for a better understanding of its potential health benefits.

Like many other cannabinoids, CBC is known to relieve pain, reduce inflammation, promote bone growth and inhibit growth in tumor cells and fight bacteria. CBC appears to impact non-cannabinoid receptors and is most powerful when used as part of an entourage effect.

THCa is the primary cannabinoid found in raw cannabis and the substance from which THC is derived. When heated above a certain temperature THCA becomes Δ9-THC, the cannabinoid most well known for its presence in marijuana.

As an acidic cannabinoid, like CBDA and CBGA, THCA inhibits COX-1 and COX-2 to a significant extent, and is one of the main contributors to the anti-inflammatory effects found in cannabis. THCA has also been found to be an antispasmodic and has antiproliferative effects on tumor cells.

The most common cannabinoid found in marijuana, THC is best known for its psychoactive properties. The “high” that is associated with marijuana comes from the reaction that THC has in the brain. THC does not just offer intoxication, it also has its own share of potential health benefits.

As an agonist of the CB1 and CB2 receptors, THC is an analgesic, reducing pain. Alongside this, research into THC at a cellular level has shown that it has neuroprotective and antioxidant properties.

Found only in particular strains of cannabis, THCV is structurally very similar to THC. However, while the THC molecule has a pentyl (5 carbon) group, THCV instead has a propyl (3 carbon) group. This difference modifies the effects of THCV, producing different effects on the body.

As an antagonist of the CB1 receptor, THCV has been found to suppress appetite and reduce panic attacks, making it a particularly beneficial cannabinoid in the treatment of eating disorders and mental health conditions. It’s also shown promise as an aid to diabetes sufferers.

This is a lot of information to take in but if you want to know more about cannabinoids, the endocannabinoid system, and how CBD oil could help you, check out the following articles:

Brain And Nervous System Conditions That Can Cause Hallucinations

Discord Push to Talk Not Working? 8 Fixes to Make it Work

Top 5 Apps That Can Monitor Your Health Activity

How to Be a Good Babysitter Best 11 Tips